Encores are bullshit. I know it. You know it. Everybody knows it.

It's a formality that involves sitting around after a band's "last" song and then pretending to be excited when they return to play their big single. It's a total joke... a low-effort attempt to create a memorable experience. Honestly, who doesn't see it coming? Who actually thinks that the harder they cheer the more likely Smash Mouth will come back out to play "All Star?"

I like to imagine that, back in the day, some hard-rocking band like AC/DC would be heading to their tour bus after playing a killer set when they're stopped by the venue owner. He's disheveled, sweaty, and nervous. The fans are totally out of control and they're demanding more AC/DC.  He's worried a riot will break out, so he desperately offers the band $10,000 to placate the frenzied mob. Angus Young waves the money away, casually says something about how they'll "do it for the fans," and they take the stage once more to play some crowd favorites. The fans go wild and, to this day, they still reminisce on the time their drunken fanaticism turned an amazing concert into an epic life experience.

Yes, I'm romanticizing this, but how awesome would it be if that's how things went? I've never seen anything like that, but last night I was fortunate enough to at least experience a legitimately earned encore.

JC Brooks and the Uptown Sound (highly recommended) was playing at the Apollo Music Cafe (also highly recommended). It's a seated venue that doesn't necessarily lend itself to dancing, and the host admitted she had no idea what to expect when she introduced the band (which was kind of hilarious). But JC Brooks put on an extremely high energy performance and the band members crushed their solos. It wasn't long before the crowd was totally won over and the tiny space in front of the stage was overflowing with folks dancing like crazy people.

When the host took the stage at the end of the show to thank the band, it was almost impossible to hear her over the cries for "one more song." After a couple minutes of unsuccessfully trying to wrap things up, she exchanging some queues with the decision makers up in the booth and then finally turned around and handed the mic back to JC Brooks. The crowd erupted into applause and the band played a phenomenal encore.

Everybody won. The audience had a great time, the band got to play more music, and the Apollo maintained its stellar reputation for being an incredible concert venue. Huge shoutout to JC Brooks and The Apollo for providing a legit encore, I appreciated it so much more knowing that we, as an audience, earned it.

Seriously, what the hell?

Since gyms, like everything else, are ungodly expensive in NYC, I've taken it upon myself to start working out at home. The 100 pushup plan seemed like a good place to start, it's geared to get you doing 100 pushups in a row in 6 weeks. I did the preliminary test on Sunday and the first day of the program today. Next post on this topic won't be for 6 weeks, at which point I'll probably be manly enough to start a lumberjack camp or something.
Posted by Vince at 8:36 PM No comments:

You don't really want it

I can't help but watch this and think that this is what it would be like if a fat white dude won a sweepstakes to be in a rap video:


Considering the fact that these are a couple dudes from Lafayette, IN, the production quality of this video isn't half bad. The beat is solid, there's a boarded up building in the background, and (spoiler alert) you get a little ghost riding in at the end. Best of all, Chunky Town is rockin' the mic for a whole verse and actually maintains some decent rhymes right up until this gem:
"Ya'll f*ggots suck like Twilight, no pun intended"
(Mr. Town wasn't available for interview, but I'm pretty sure the pun was actually intended)
But nothing compares to his dancing. Nothing. Learn these moves and you'll be absolutely unstoppable at every bar and club known to man. I'd expect nothing less from the same artist that stars in the hit video "Titty Boy Swag."
Posted by Vince at 6:35 PM No comments:

For those of you that aren't in the know:

If you like this video (you do), the autotune mix is solid as well.

In any case, one of those healthy, socially responsible burger places around the corner had this on display last night: 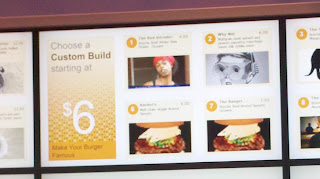 Burger #1: The Bed Intruder
Of course, I ordered it without even looking at the ingredients, and thought it was awesome without even thinking about how it tasted. It turns out this place lets you create your own burgers on their website and, whenever people buy the burger you created, you get $0.25 credit to use there.
New goal: Create burgers based on every meme possible so I can eat there for free every night.
Posted by Vince at 2:31 PM 1 comment:

I moved to NYC!

It's been ages since my last post. This is partially due to the fact that I've been getting busy with other projects (see http://shmup01.blogspot.com/ ), and then majorly due to the fact that I ended up switching jobs within my company and moving to NYC! I've been in the city for a month now, have my bearings, and will hopefully have PLENTY to write about. I'm not sure how much time I'm going to devote to the game programming, but I'm fairly seriously considering not getting internet in my apartment (gasp). This is partially to cut expenses (like everything else in NYC, it's really expensive), and partially to ensure I get my ass out into the city!
Thus, my current goal is to convert the theme of this blog from "Chipotle Worship/Pure Miscellania/Chronic lack of posting" to "Chipotle Worship/Pure Miscellania/NYC experiences big and small." We'll see how it turns out.
Posted by Vince at 2:26 PM No comments: